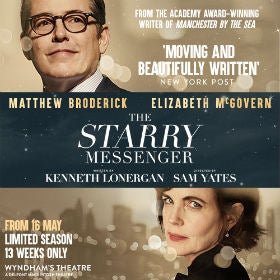 Mark Williams is a scientist, an astronomer. He works at the New York City Planetarium, and he's much more comfortable with the stars, moons and space dust than he is with everyday life. He even finds the universe more understandable and easier to handle than his wife. A man like this doesn't believe divine intervention exists and has no time for the idea of fate. But when he coincidentally meets Angela, a young single mum, his universe changes beyond recognition. Have the stars really aligned? Was he wrong about there being no intervention of any sort, no need to factor fate into life's equation? When things go wrong – very wrong - he is finally forced to question life, the universe and everything.

Matthew Broderick is a hugely talented American actor and singer whose raft of top roles have made him a well-loved star of the finest kind. His roles in Ferris Bueller's Day Off, as the adult Simba in Disney's Lion King, as David Lightman in WarGames and as Leo Bloom in The Producers, have wowed audiences time after time. No wonder he is the proud owner of so many awards. He stars alongside the wonderful Elizabeth McGovern, whose roles in Downton Abbey and The Handmaid’s Tale have made her a household name on both sides of the Atlantic. You'll love this brave, bold exploration of what love means, what hope is, and the complexities of the human race's relationship with the universe we live in. Lovely stuff.