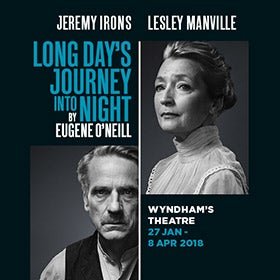 Here's a recipe you won't want to miss: grab a couple of the UK's best-loved actors, Jeremy Irons and Lesley Manville. Add a critically acclaimed 20th century American play. Stir in a sold-out run at Bristol Old Vic, and add a generous splash of Richard Eyre. The result, Eugene O'Neill's Long Day’s Journey Into Night, transfers from the Bristol Old Vic to Wyndhams theatre in early 2018, and the anticipation is already mounting. Long Day’s Journey Into Night is a drama in four acts written for the playwright's wife in 1941–42 but not put on stage, at the playwright's request, until after his death. It was first produced in 1956.

This play is partly autobiographical, designed to reveal to O'Neill's wife how complex and strange his childhood was. The father figure is dying of TB, the mother a morphine addict, and the two sons suffer as the parents deny the past while being totally unable to face the future. The truth eventually destroys them all. It's dark, moody, brooding and tragic... and boy, it's powerful. If you fancy experiencing a world-class literary classic for yourself, tickets are on sale now.