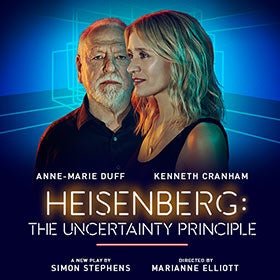 Here's an irresistible theatrical recipe for you. Take the Olivier and Tony award-winner Marianne Elliott, she of The Curious Incident of the Dog in the Night-Time and War Horse fame. Add the respected former National Theatre producer Chris Harper, who also comes with immaculate theatrical credentials. Throw in the masterful playwright Simon Stephens, and what do you get? An extraordinary play inspired by the work of Werner Heisenberg, the spooky nature of quantum physics and the equally unpredictable nature of the human heart.

This play scored high on Broadway, now it's due to score equally high at Wyndhams theatre in late 2017 and early 2018, on for a strictly limited 14 week season. It is being hailed as a 'surprising and life affirming' story about what can happen when two complete strangers' lives collide unexpectedly thanks to a chance encounter in a crowded London Underground station. Sometimes the oddest circumstances can change your life forever. This is one of those times. Starring the critically acclaimed actors Anne-Marie Duff and Kenneth Cranham, you won't want to miss this “soaring, suspenseful, thrilling and wondrous” two-hander of a play.