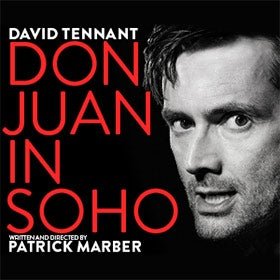 Scandal just doesn't cover it. In this latest in a string of adaptations of a story dating back to the 1600s, Doctor Who heart throb David Tennant plays Don Juan himself, a cruel and heartless lothario whose seduction of more than 5000 women makes him a legend in his own lifetime. Spaniard Tirso de Molina penned the original tale, called El burlador de Sevilla, in 1630 to make the point that everyone, even someone like Don Juan, must eventually pay for his sins, and that death makes us all equal. It's a powerful story, its influence proven by the fact that today, 'Don Juan' is a term still used to describe a seducer, a womaniser.

Don Juan in Soho, by British playwright Patrick Marber, originally hit the stage in 2006, premiering at the Donmar Warehouse and directed by Michael Grandage. Because it didn't transfer to the West End at the time, relatively few people got to see it. Now it's back, on at Wyndham's theatre in March 2017 with the delightful David Tennant himself playing the legendary lothario brought bang up to date. Directed by Marber himself, it's being billed as subversive and outrageous, 'filthy' and scandalous, savagely funny, disturbingly dark, violent and disgracefully sexy. This is a theatreland event you won't want to miss – obviously suitable for grown-ups only.