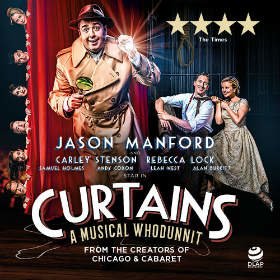 You want a Christmas musical that's on in London's West End? You want something special, a class act? This is it. Welcome to Curtains, the Tony award-winning show that was nominated for eight Tonys, won one and charmed Broadway. Now it's over here, fresh from the magical pens of Kander and Ebb, and it is hilarious, exciting, fun, fast and furious from start to finish. Head for Wyndhams theatre over the festive season and into the New Year to see our very own comedy hero Jason Manford do his thing, a stand-up comedy genius as well as a talented actor and a very good singer with one of those lovely deep crooner voices. If you're after a jolly family treat for the darkest time of year, this is it.

What's the plot? When Jessica Cranshaw, the glittering star of a new theatre show called Robbin Hood, is murdered on stage during the opening night, everyone is under suspicion. When detective Frank Cioffi turns up to solve the crime he ends up doing a lot more than finding the killer. As a man obsessed with musical theatre, he also saves the show. Expect a clever whodunnit with countless catchy show tunes, unforgettable characters and lots of hilarious plot twists, starring the brilliant Jason Manford along with Carley Stenson, Rebecca Lock, Samuel Holmes, Leah Barbara West, Alan Burkitt, Andy Coxon and many more, a dazzling cast that makes a splendid job of an epic musical.