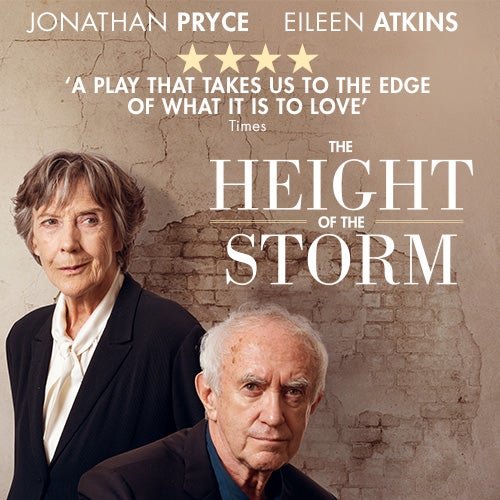 The Height of the Storm

In their first ever theatrical collaboration, Olivier Award winners Jonathan Pryce and Eileen Atkins join forces in Florian Zeller’s latest production, The Height Of The Storm. The production plays for just eight weeks from 2 October 2018 at Wyndham’s Theatre.

The Height Of The Storm examines a fifty-year relationship between André and Madeleine, which has been a happy and loving marriage. Then their daughters come to visit, a bunch of flowers is mysteriously delivered and a woman from their past turns up unexpectedly. Buy ticket now to find out what is really going on!

French playwright Zeller has much success on the London theatre scene – his works, translated by Christopher Hampton, include The Lie at Menier Chocolate Factory, The Truth at Wyndham’s Theatre and The Father, also at Wyndham’s. The last two are Olivier Award nominated and The Father gave Kenneth Cranham his first Olivier Award in 2015 for Best Actor.

Jonathan Kent completes the star-studded creative team as director, best known for his work at the Almeida Theatre from 1990-2002. During his tenure as co-artistic director (with Ian McDiarmid), he transferred 14 plays to the West End and to Broadway.