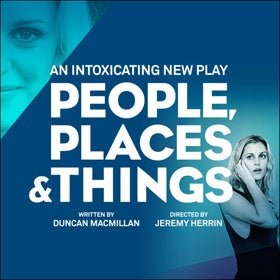 Denise Gough, playing the starring role as Emma, has blown the critics away with her talent in this remarkably powerful new play. It has already scored a massive sell-out hit at the Dorfman Theatre. Now it's on at Wyndham's Theatre for a limited 12 week run, a gritty, bleak and funny story of addiction and redemption. The production comes from the Headlong Theatre company, in collaboration with the National Theatre, and it's directed to perfection by Wolf Hall's Jeremy Herrin.

Gough recently won a Critics’ Circle Award for Best Actress, another sign you're in for a fantastic night out, a rare theatrical treat. What's the plot? Actress Emma is on top of the world. She's having wonderful time... until the non-stop party ends and she finds herself in rehab. Is Emma just an addict, or is the modern world at fault? Emma's real problem is contemporary life itself, a place filled with disaster and calamity, where remaining sober is a challenge. Loud effects, strobe-like lighting, strong language and drug-taking scenes complete a powerful piece serious theatre lovers won't want to miss.